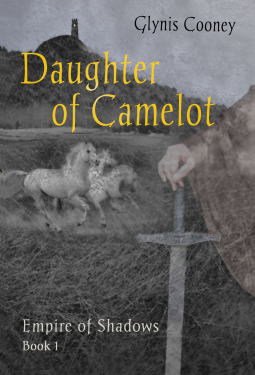 Daughter of Camelot by Glynis Cooney is the first book in the Empire of Shadows series. I was immediately tempted by The DoC when I saw it was based in the time of Arthur and Merlin, a time which allows magic, bravery, courage, honour, battles, love, and fantasy to roll into one: providing a breathtaking backdrop for any novel.

Cooney delivers; her world is well developed with various forts and courts all differing slightly or greatly, but still with the same underlying themes of deceit, intrigue and politics. Her characters vary from false greedy men seeking power, to pure noble true men (often whose appearances would lead someone to believe they were the former), from brave characters desperate to prove themselves to cowardly sinister characters stabbing the most honorable in the back, disregarding the true values of the Knights Of Camelot and of Arthur's Court.

Although on occasion the grammar was poor or parts badly phrased, this did not subtract from the novels overall brilliance and Cooney weaves a world of power, that is still imprinted on my brain, thrumming to the beat of time running out and armies marching. The plot itself follows Deirde, who thirsty for adventure, is determined to defy Fate and safe the King from those plotting against him. Cooney employs artistic license to change the legend of King Arthur to suit her story's needs but there was little indignation on my part, at least, when the story took a detour from the original legend as Cooney knits a story that stands both beside and aside the legend; in its own way it is a unique story but parts still ring true to the famous saga.

Any one brave enough to tackle such a well-known legend deserves applauded but Cooney deserves special acclaim for this novel that bolsters and adds to the already glorious fable. Also as it doesn't directly follow King Arthur but instead some-one in his various courts it doesn't feel too familiar.

The Daughters of Camelot receives 4 out of 5 and I eagerly await the next book in the Empire of Shadows. It is published by Mabon Publishing and can be purchased at Amazon.co.uk for £3.59 (Kindle).

Well if you're looking here, than you're thinking about leaving a message! Go on I'd like to hear from you...... well unless you're going to be nasty, hurtful, creepy (yes you bald old man), etc..... Look forward to hearing from you... Adios X

THE Book so far this year.... just waiting to be toppled